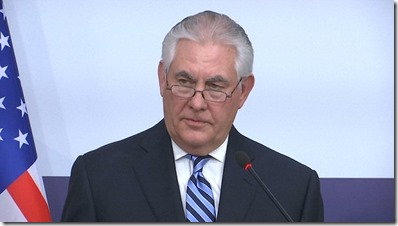 This is a local re-posting of an essay I wrote for The National Interest a few weeks ago. And Rex Tillerson’s recent comment that  Obama’s ‘strategic patience’ approach to North Korea is over, just highlights my argument. He’s almost certainly wrong, even if he is saying it out of a frustration which most in the analyst community share. We all want to do some kind of game-changer to alter the arc of North Korean behavior, but the non-strategic patience options are all terrible unfortunately.

The Trump people are said to be considering all options, including kinetic choices or meeting with the North Koreans. An internal policy review is occurring. It all sounds very dramatic, but I’ll say for the record that, barring some bizzaro Trumpian meltdown, any major shift is unlikely.

Strategic patience – best understood as containment and deterrence – has more or less been US, South Korean, and Japanese policy toward North Korea for decades. Sure we didn’t call it that, but that’s pretty much what it has been. We’ve had lot of provocations over the years which reasonably warranted counter-strikes, just as we’ve had lots of chances to talk. Neither have worked. So we end up defaulting back to containment and deterrence – waiting for North Korea’s internal contradictions to bring its collapse, and constantly, frustratingly negotiating with the Chinese to cut, or at least constrict, the umbilical which keeps Pyongyang afloat. This is fatiguing and uninspiring, but just about every conceivable policy, barring bombing, has been tried, so I doubt Trump has anything new. Are the Trump really read to risk a major regional conflict?

Recently in these pages and elsewhere, I have defended the unpopular notion of ‘strategic patience’ regarding North Korea. The term is an informal one which emerged from the administration of former American President Barack Obama. Like that other informal Obama meme, ‘leading from behind,’ it received wide criticism from proponents – neoconservative and liberal internationalist – of an activist US foreign policy. A common line of criticism is that strategic patience is indistinguishable from doing nothing, and indeed the moniker does suggest that, which is unfortunate. The following is an effort at a more robust defense.

Patience does indeed suggest waiting, and while this seems demoralizing, I defend it, because more active approaches have huge downsides. This is why, despite the regular ritual of North Korea policy reviews when new administrations take over in Washington or Seoul, we usually end up defaulting back to deterrence and waiting for North Korea and its Chinese patron to change.

Specifically, we are waiting for North Korea to liberalize and/or China to realize that its support for North Korea is more damaging than beneficial. Much as we waited for the internal contradictions of communism to catch up with the Soviet Union – which they did by the 1980s – so we are waiting for some kind of opening in Pyongyang. We must also wait on China, because Beijing’s assistance to North Korea buys the regime time and space to escape those contradictions. If North Korea were truly isolated, without its Chinese sponsor and with Chinese cooperation on United Nations sanctions, the failures of the North Korean system would accumulate rapidly, much as they did in the late 1990s.

Obviously, these are high hopes. We will indeed be waiting for a long time. But that does not obviate the strategy. It worked in the Cold War, and just as more active approaches toward the Soviets, like rollback, had large risks that ultimately made patience and continuing deterrence the best choice, so it is in Korea.

Alternatives are Tempting But Risky

On the right, hawks would have us consider kinetic options. Indeed, now that North Korea is talking of a nuclear intercontinental ballistic missile, US President Donald Trump’s administration is apparently considering airstrikes. South Korean administrations too have considered forceful options, most recently in 2010 after two North Korean provocations in six months killed around fifty South Koreans. At the last minute, the South Korean president at the time, Lee Myung Bak, demurred for reasons that are instructive and continue to hobble all kinetic deliberations.

There is little doubt that US and/or South Korea airpower could deal punishing blows to North Korean missile and nuclear sites. North Korean air defense is far behind the allies’ hi-tech capabilities. Rather the concerns are:

1. Airstrikes might provoke a war. The allies would indeed win that war, but the civilian death toll would likely be in the hundreds of thousands, and maybe reach the millions if North Korea were to use nuclear weapons. We do not know what the red-lines of the Korean People’s Army are, but its massive role in the state is predicated on its ability to defend the homeland. Airstrikes would directly challenge that rationale; the brass would like demand a major response.

2. Seoul is hugely vulnerable to retaliation. Even if kinetic action does not spark an all-out war, South Korea is still poorly configured for any kind of lesser, tit-for-tat escalation with the North, because its capital, Seoul, begins just thirty miles from the demilitarized zone. That puts it within artillery range and is the reason why South Korean leaders have never green-lit extensive counter-strikes to North Korean provocations. Seoul is just too vulnerable.

On the left, doves would have us engage North Korea. Yet here too the downsides are large. Just talking to North Korea gives it major benefits, regardless of whether the talks actually go anywhere (this is why North Korea always wants to talk). And North Korea’s history of keeping its word in negotiations is famously terrible. The last major US-North Korea agreement was the ‘leap day deal’ of 2012 (so named because it was struck on February 29). As Ankit Panda notes, it started falling apart within weeks, and taught US negotiators that North Korea under the new Kim was still the slippery, bad faith negotiator it had always been. Indeed in a meeting last year, I heard former US ambassador to South Korea Mark Lippert say that the North Koreans starting reneging on the deal within days.

Probably the most egregious example of bad faith though is the continuation of the North Korean missile and nuclear programs through the ‘Sunshine Policy’ period. Two consecutive South Korean liberal presidents reached out to North Korea over ten years, 1998-2008. Tremendous efforts were made by the South to bring North Korea in from the cold, garnering one of those presidents the Nobel Peace Prize. Yet North Korea made no real concessions, did not change, and continued its weapons programs and other bad behavior like proliferation, counterfeiting, drug running, and so on. Hence the large risk that deals with North Korea de facto subsidize the regime, because the North will not keep its word, nor tolerate the highly intrusive inspections which would be needed to insure it did.

Given those poor choices on the right and left, the ‘centrist’ status quo of waiting on North Korea, and China, does not look so bad. It is certainly not ideal. It is bland and rather inert, especially for Americans with our tendency towards activism and manicheanism in foreign policy. But it has kept the peace for decades, and the Soviet example suggests that waiting out North Korea may work.

Finally, strategic patience need not mean passivity among the democracies germane to the problem, namely South Korea, Japan, and the US. While we wait for China and North Korea to come around, those democracies can: expand their defense spending (especially Japan), significantly improve missile defense, start taking seriously civil defense against missile strikes on their cities, tighten sanctions, push China at the UN and elsewhere regarding sanctions enforcement, and trim away North Korea’s diplomatic contacts which it uses for illicit, hard-currency raising programs, especially in Africa, the Middle East, and Southeast Asia. So yes, we must be ‘patient’ regarding North Korea and China – there is little other choice – but we need not passive at home.

4 thoughts on “Tillerson is, Regrettably, Wrong. Strategic Patience is a Good Idea. And It will Happen Anyway”