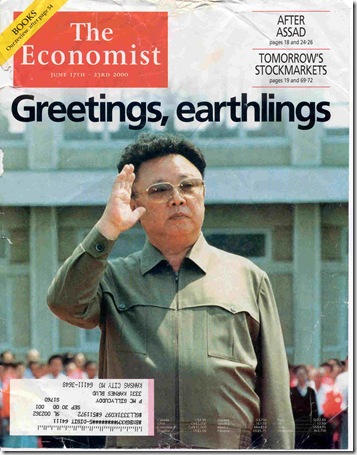 I agree with just about everybody else in the blogosphere that Obama did not deserve it. As many have noted, he has not done anything really. I also concur with the emerging center and center-left conventional wisdom that he should have declined it. The US Right will certainly pick this up as confirmation that Obama is just a celebrity, more interested in placating Europhilic cosmopolitan elites than defending Sarah Palin’s ‘real America.’ Fox can be counted on to get a week or so out of bashing ‘arugula-eating, latte-sipping, Mapplethorpe-loving bicoastal elites who like to be liked in France.’ You’ve already heard that story from Coulter & Co. for years, but Obama offers them ammunition when he revels in the glow of post-modern euros. He should have ducked this one. More importantly, he should do something.

The other obvious insight is that giving this to Obama does not really promote peace in the future. Maybe the Nobel committee is trying to bind/blackmail him into not bombing Iran or paying the US back dues to the UN. But basically, this is an award for not being George W. Bush. Far more useful to actually improving peace would have been to award it to those struggling to overturn or moderate some of the world’s worst regimes. Andrew Sullivan suggested some of the Iranian dissidents. A friend thought Morgan Tsvangirai. I thought perhaps some of those Russian journalists who get killed for reporting on Chechnya. The point of these choices – besides the obvious fact that they deserve it and O does not – is that the Prize might actually help their causes significantly. These dissidents need resources to press on and international press coverage to make sure they are not killed by the regimes they challenge. Tsvangirai, e.g., is almost certainly only still alive, because he garners so much western attention. The Prize would bring powerful moral credibility to those desperately in need of it.

But you want to know what Kim Jong-Il has to do with it. The Dear Leader’s greatest fear now is execution in post-unification South Korean courts. Survival, not juche, is the real ‘ideology’ of the regime. Kim basically wants to survive to die warm and secure in his bed, like his dad. As Hobbes famously said in the Leviathan, he fears not death, which is inevitable, but a violent death. He does not want to got the way of Mussolini, Ceauşescu, or Saddam Hussein. And before he goes, Kim wants to party for a few more decades. He loves the movies, the booze, and the ‘joy brigades.’

Because of his fear of hanging in a South Korean prison, he holds on to NK as best he can. So why not make a deal with him? The Nobel committee already gave the Peace Prize to Yasir Arafat. How about a secret deal to give it to Kim in exchange for an opening of NK? If Kim had a peace prize in hand, the SK government would certainly never execute him.

If this sounds pretty far-fetched, recall how damaged the Nobel Peace Prize’s credibility already is. If Yasir can get one and Gandhi can’t, who cares if Kim gets one? If it helps convince him he won’t get executed, then so much the better…