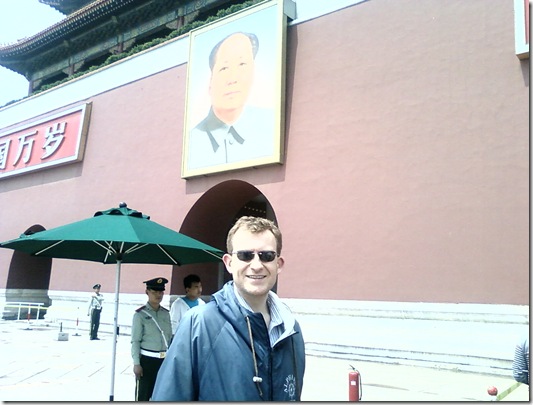 So last weekend was my first trip to China. As I said a few days ago, actually being there did change my mind a bit. I was pushed a little from the ‘China threat’ to the ‘peaceful rise’ school. I imagine this is natural. Travel humanizes other people and makes one less suspicious…

So here some relevant observations:

1. Tiananmen Square has a  Mao mausoleum, just like Red Square has the Lenin mausoleum. I have visited both, and I can genuinely say they are some of the strangest, creepiest political artefacts I have ever seen. You go in well-dressed and walk in silence around the embalmed body kept under glass. (What must they do to preserve it one wonders.) It is like visiting the Vatican for commies. As communist ‘holy relics,’ they are conceptual oxymorons. Russians used to tell me that Stalin killed God, so he took him out of heaven and put him in Red Square mausoleum as Lenin. Communism could destroy individuals religions like Christianity, but not the religious impulse – which of course was a central point in Marxism. These mausoleums, in deifying communist founders, betray a central principle of the movement. On top of that irony, they sell red kitsch of Mao inside the mausoleum. So after you see the Great Helmsman and think Great Thoughts about China, you can buy Mao cufflinks and playing cards in the on-site giftshop. Hah! If that doesn’t make a mockery of the whole point of the mausoleum… Mao is now a tourist attraction, not a communist patron.

2. The Great Wall really spurs the imagination about big, Will Durant-style topics like ‘Civilization vs barbarism.’ It is hard not to be swept away by the romanticism of it all. You can easily picture some Ming guard pacing in the cold night suddenly looking out at some vast swarthy horde like the Teutons from the beginning of Gladiator. The Great Wall is built along dramatic mountain ridges, so it grips the imagination as Hadrian’s Wall does not. It is also more intact and much larger than Hadrian’s.

3. The Forbidden City, like the Winter Palace or Versailles, explains why republican and communist revolutions happen. The opulence is just astonishing. Wow. I was just blow away by how big it was. As you go through, you keep thinking that this court or that room will be the last one, but no, it keeps going and going. The emperor even got his own individual tunnel to exit and enter. (Ie, the place is so huge, that there are multiple giant tunnels through the walls, not just one, and the emperor got one all to himself.) I visited Versailles and Winter Palace as well, and every time I see these megalomaniacal monuments to a ‘sun-king,’ it is easy to see why these guys get tipped at some point and frequently executed. I also think that is terribly hard for moderns raised in a democracy to feel the moral weight of such places. To us, they look more like criminal waste of national resources than the necessary glorification of the unity of man, state, and god in the sung-king’s person, which contemporaries must have seen.

4. The Mao portrait on the Forbidden City is a symbol of communist modernity’s defeat of feudalism. This did not really hit me until I went there. Once you see the size of the Forbidden City, and then the huge portrait placed right on top of it, you get the idea. How ironic then that China is now digging around in its history for its post-communist nationalist identity. Chinese language institutes are called the ‘Confucius Institute,’ even though Mao loathed Confucius as a reactionary. Communist modernity failed, so now China’s feudal past is being reworked as a tourist attraction and cause for nationalism.

5. You can see the two Chinas phenomenon everywhere. Any rapidly developing state is going to have this kind of social fracture, as the young and globalized pull away from the older and traditional. This is happening in India right now also. You can see the older parents – smaller, worse teeth and skin, plain clothing – and the increasingly US teenager-looking kids in bluejeans and t-shirts. This must be quite a culture clash in the home, and it makes me wonder if that is the reason China emphasizes harmony so much. The social cleavage is wide, and both sides have strong claims. The young represent the future and wealth of China; the old built the place (however mixed that accolade might be) and are deeply vested in the party-state that ended the ‘national humiliation.’

6. China’s scholars are reveling in big talk about the changing balance of power. At the conference I attended at the China Foreign Affairs University, speaker after speaker made sure to tell us how China was rising and the US needed to make room for China’s ‘legitimate interests.’ I heard this a lot last year too, but this time I was on the home-turf, so it was even more self-congratulatory than before. At one point, I just couldn’t take it anymore, and got into a major scrap over the Cheonan. I told them everyone in SK knows that China is propping up NK. The response was more obfuscation – maybe the ship hit a rock, we need ‘calm’ on the peninsular. Bleh…

4 thoughts on “Off to China… 4) Impressions”