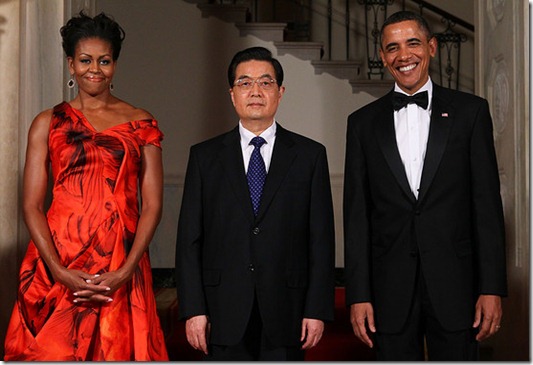 Everyone and their mother has commented on Hu’s trip to Washington this week. I would only add a few points.

1. I kinda wonder why Hu even wanted to come. Consider all the things the US wants to talk to China about that Hu has zero-interest in discussing: democracy, human rights, Liu Xiaobo (the 2010 Nobel Peace prize winner) and press freedom, the non-float of the yuan, the forced partnerships between foreign MNCs and Chinese companies to informally coerce technology transfer, hacking, Tibet, IPR/piracy, NK, Taiwan, the South China Sea, etc, etc… You don’t need to be a sinologist to know that the Chinese Communist party (CCP) isn’t going to change on this stuff for awhile, and certainly not at the behest of foreigners. Nor does it really even want to talk about this stuff at all; hence the Chinese recitation/dodge that almost every point of contention is an ‘internal Chinese affair.’ The tide is running in China’s direction macroeconomically, meaning China doesn’t have to listen to us. So why bother to show up at all?

2. My answer is prestige. Gordon Chang pretty much nailed it for Hu himself. China’s government is a bureaucratic monster even worse than the US government. Not only is China four times the size of the US demographically – thereby requiring more people in government – but the CCP and PLA (military) are heavily involved in politics and industry, making the beast yet larger. The only possible way that Hu can try to guide this sprawling, confused, self-contradictory Titanic of a ship-of-state is through his own stature. And what better way to buttress that than through pictures with the leader of the world’s only superpower. Dictators have no means of ascertaining their domestic legitimacy, and therefore seek parallel legitimacy abroad which can be ‘reflected’ back home. So if the president of the world’s superpower is sitting next to your repressive nasty, then it must be ok to be repressive and your guy isn’t as bad as you thought.

3. But it’s more than just Hu’s tough spot back home. China’s elites deeply hanker for US recognition. China’s national ideology is grievance and nationalism – the 100 years of humiliation. When you visit Tiananmen Square, there is a huge video screen playing regular imagery of this post-1989 ‘China is awesome’ motif. Communism is dead; ‘getting rich is glorious’ is hardly bracing or communitarian enough to bind a billion people together; democracy is not a option. So a Weimar-style nationalism of grievance and national shame is the substitute (even if Chinese academics think it is bunk, as was my experience in China). So China’s got a big chip on its shoulder and satisfying this thirst for status is the reason for all the pomp and fuss of the visit, for the Rovian levels of choreography that left nothing to spontaneity (as with the 2008 Olympics), for the Chinese insistence that it be a ‘state visit’ with Obama in a tux, for the meeting with Congress, for the empty banalities of Hu’s actual comments, etc. Process, not substance, was the whole point – a process wherein the US looks like an equal to China, not a superior, wherein the leader of the only superpower bows and toasts to a Chinese, wherein ceremonialism, flags, uniformed soldiers saluting, endless fussing about who sits where, and lofty rhetoric go unsullied by real work or substance.

4. So you say, what was the whole point then?Process for its own sake sounds like a huge waste of money all around, and giving the Chinese something for nothing. This is true, but the US is now so dependent on Chinese Treasury purchases that playing China’s reindeer games is a worthwhile tradeoff to get more of their money, at least until we get our fiscal house in order. That’s the US benefit. And for the Chinese?

Atmospherics count for a lot in Asia. Asian media is more self-congratulatory, more statist, and more concerned with image and rank of their leaders aboard. This is why ASEAN meetings, an endless, do-nothing merry-go-round of photo-ops and ceremony, still happen. Little is achieved; ASEAN is 2/3 the age of the EU but has done maybe 10% of the work. Yet still it meets, because process – with consequent coverage on CNN and pictures in the Economist or New York Times – is a goal itself.  A few years ago, when President Lee of Korea met George Bush for golf, Lee drove the golf cart around. To Americans, it looked like two buddies having fun, and this was exactly the sort of downhome, buddy-buddy stuff W liked in diplomacy. But Koreans took it as Lee chauffeuring George Bush around and got miffed that it was some kind of snub by the white guy. This was between allies, and the Americans had no idea the pic would be received that way. In fact, Lee looks like he’s having a pretty good time – all the more demonstration of Asian tetchiness on perceptions of rank and social hierarchy. For China then, this is even worse, because the media is wholly state-directed and even more jingoistic than Korea.

The root of this is Asia is Confucianism. Western traditions of equality and individualism are imports here. The long cultural tradition is hierarchy, in which a junior recognizes the moral/intellectual superiority of a senior (and increasingly today, greater wealth implies the higher ranking position). Social disruption stems from the junior’s unwillingness to recognize his place (yes, just like in Plato). Hence, the endless Chinese usage ‘harmonious society’: China’s population is supposed to recognize the moral/developmental excellence of the CCP and follow its learned orders, not protest for human rights or democracy. Applied internationally, this Confucian schematic of rank and dominance layers a further moral sheen onto the realpolitik division of the world into great, medium and small powers. For a long time, the West (and whites, to be very honest) was perceived as the senior, even if the British imperialists and American administrators who embodied this, did not know it. But with EA’s recent growth, it is time, deliciously, to rebalance the hierarchy. Hence Obama has to give a state dinner to an Asian, and W should be the one driving the car. There is a lot more going in this visit than China’s growth; Western fetes of Asian leaders serve a deep, local cultural/racial desire to see Asians in place of the Confucian master/senior in interstate relationships.

5. More generally, everyone likes recognition, and recognition flows downhill. That is, stature is imparted by those ‘above’ you. Hence the president of Korea likes golfing with W, because it makes Korea look like a great power, while the US gains little prestige from the visit. For China, the only possible state than can confer rank on it is the US. Getting US peer recognition is central to the ‘we’ve-been-stepped-on-by-foreigners’ narrative of the CCP. Rising powers particularly care a lot about recognition of their ‘place in the sun’ by the old guard.

6. Also: I was pretty pleased to see the western media give Hu a hard time on human rights. The US media was made a fool of by the Bush administration. Here was a chance to get its integrity back. Well done.

16 thoughts on “Hu, Obama, and the Chinese-Confucian Hankering for Status Recognition”