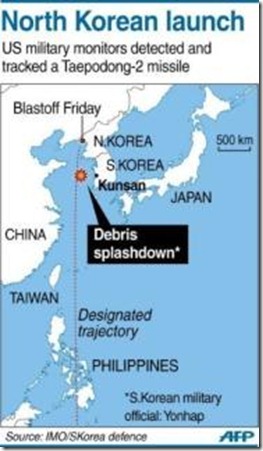 Jennifer Lind has a good piece up on Foreign Affairs this week on why NK seems to regularly get away with with hijinks like last week’s rocket test (which directly contravenes UN Resolution 1874). She notes, correctly, that NK has been pulling unanswered, wild stunts like this for years – shootouts in the Yellow Sea, nuclear tests, kidnappings, etc. Further, the US particularly tends to hit back when hit. Indeed, looking at the GWoT, America’s problem is over-reaction rather than passivity. If we look at the Israelis, it’s similar. They have a well-established reputation of hitting back, hard, when provoked. So why don’t the democracies of the Six Party Talks (Korea, Japan, US) do the same here? They easily out weigh NK.

Her argument is that NK manages to deter counter-strikes through a bizarre mixture of the ‘madman theory’ (what will the loopy, hard-drinking, megalomaniacal Kim family do next? so let’s just not provoke them), regional fear of what would follow a NK implosion (après moi le déluge), and traditional nuclear deterrence (if Saddam and Gaddafi had nukes, they’d still be alive, so we’ll never give them up!).

None of that is wrong, but I think she’s missing the big factor – SK domestic politics. Lots of countries and other international actors do wacky, crazy stuff; the question is whether the target wants to counterstrike and risk escalation. So it is SK ultimately (not the US or Japan) that decides whether or not to hit back. And SK doesn’t want to, because 1) South Korean population centers are extremely vulnerable to Northern aggression, and 2) South Koreans just don’t care that much about NK anymore.

I’ve written a lot before on the issue of SK’s extreme vulnerability and how this ties the Korean military’s hands (here is the full write-up, also here; this, picked up on Lawyers, Guns, and Money, is a long discussion thread of my argument). 50% of South Korea’s population lives northwestern SK, in the extremely dense Seoul-Kyeonggi-Incheon corridor. The southern most tip of this massive agglomeration is less than 70 miles from the DMZ. The extreme demographic concentration of the Seoul area is worsening too. Busan, the second city, where I live, is shrinking, even though we are a paltry 3.5 milllion, and Incheon, the site of a super-fancy new airport, is growing. This corridor is huge, proximate, defenseless city-hostage to the North. NK does not need nuclear weapons to jeopardize these inhabitants, which is why I remain skeptical of the hawk/neocon line that NK’s nukes change the balance in big way. (Lind herself has a made a similar point.)

I have brought this point up again and again at conferences here, and I have gotten no real response. Does it make any sense to hyper-centralize a country in a direct competition with a dangerous neighbor and place the grossly overpopulated national capital just 40 miles from the border? Who thought that would be a good idea? Look at what the West Germans did. But decentralization never happens because of the cost and resistance of Seoul-based elites who like the convenience.

Remember how Cold War planners used to say that the US had an advantage over the USSR, because its many federal layers of government and widely dispersed population meant it could absorb a Soviet strike better? By contrast, because the Soviets centralized everything in Moscow, they were very vulnerable to a decapitation strike. The logic is the same here. The ROK is extremely centralized (a legacy of the Park Chung Hee dictatorship), not just politically, but in just about every way – culturally, economically, demographically. And it’s all but impossible to shield these people from a NK rocket and artillery bombardment (even non-nuclear). That Korean urbanites live in towering apartment blocks vulnerable to World Trade Center-style collapse if bombarded only worsens the vulnerability. This dramatically ties the hands of the SK government. Even if none of Lind’s three variables applied, this huge risk alone is enough to prevent SK escalation/response (as is likely the case in the foregone retaliation after the Yeonpyeong incident in 2010).

Next, Lind does not address the growing disinterest in SK for retaliation, or even otherwise engaging NK. Several Korea-based western analysts (me, Brian Myers, Brendan Howe) have made this point. In a post-Yeonpyeong analysis for the Korean National Defense University, I argued that the most likely way to end the Korean stalemate is get greater South Korean commitment to ‘win’ rather than simply manage-when-necessary-and-ignore-when-possible, today’s current ‘strategy.’ And at the Korean Institute for Defense Analysis last year, I argued for a significant effort to ‘harden’ South Korea to withstand this competition. When Brendan and I suggested raising SK defense spending, which is a paltry 2.3% of GDP, the room roundly said it’s politically impossible.

In IR lingo, SK is not really a revisionist anymore; it is a status quo power. De jure, (i.e., in its constitution), the ROK is committed to unity, but as anyone who’s lived here for just a little while can tell you, most South Koreans are genuinely frightened of NK’s collapse – not of NK, mind you, but of its collapse: the huge amount of money it will cost, the massive, generations-spanning reconstruction it will require, internal ‘refugees’ from the north decamping in southern cities, loss of the hard-won OECD lifestyle in the name of national sacrifice, etc. South Koreans would much rather buy iPhones, travel, study in the West, move to Seoul, and get a cool job with Samsung.

I see this in my students all the time. We talk about reunification in class a lot naturally. It’s an unnerving abstraction to them; they certainly don’t get fired up about it. I have never seen a Korean get passionate, angry, or intensely patriotic about unification, even though they are a very nationalistic as a people. In my experience, South Koreans get more angry and emotional over the Liancourt Rocks dispute with Japanor or the Dongbei/Mt. Baektu flap with China than over NK . Just look at the lack of interest and care shown to North Koreans who make it here (a terrible moral failing, IMO). Or, I’ve had students tell me that my discussion of the 1990s famine in NK that killed maybe half a million people was just American propaganda I picked up from the US military in Korea.

If you’re wondering if this really strange, yes, it is. North Korea has probably the worst long-term human rights record of any country in the world, yet South Koreans don’t want to talk about it. I guess a parallel is Germans under 40 years old by the mid-1980s. They too increasingly saw the inter-German border as a real border, not a temporary division. Divide a community long enough, and I guess it slowly becomes two. That’s not too surprising. It’s rather uncomfortable that outsiders, usually Americans, are the ones who seem to push the NK issue and worry about NK human rights and nutrition. I am continuously mystified and moral discomforted that NK doesn’t dominate SK politics.

But that’s how it is. And if we believe in democracy and self-determination, we have to respect Southern public opinion. We can’t get in front our own ally who will carry most of the costs if there’s a war or collapse. When I came to SK I shared the typical American hawk/neocon thinking regarding NK – on the axis of evil, the worst country on earth, run by power-mad lunatics, deserved to get punched in the face at the earliest opportunity, etc. All of that is still true of course, but the longer I live here, the more I have moderated on what that means for policy. South Koreans really don’t want a war or escalation, no matter how many times western IR and think-tank types tell them that NK is dangerous, erratic, terrifying, etc. (I’ve seen this so debate so many times here); they don’t want to risk much for regime change; they don’t want to ally with democratic Japan against communist NK and China, regardless of what structural realism and democratic peace liberalism say; SK is very vulnerable and neocon-John Boltonism looks reckless and scary to them; most don’t really believe in their hearts that their ethnic compatriots to the north will nuke them. Yes, there are demonstrations sometimes against NK, but look closely and you’ll notice that most of the demonstrations are small and the participants elderly. Washington may not like this (I don’t either), and it may feel morally uncomfortable, in that it effectively abandons North Koreans to the brutal status quo, but this is where Southern public opinion is.

So South Koreans seem increasingly comfortable letting NK go its own, bizarre way. I think this is why the conservative, anti-communist press here comes off so unhinged; they’re terrified that South Korea is effectively a status quo power now (which is true). President Lee’s post-Sunshine Policy return to confrontation is very unpopular here (even though lots of western analysts I meet here [me included] think it was a good idea to give it up). Even the conservatives in this year’s elections here are running as doves now. Lots of Koreas thought that the 2010 Cheonan sinking was a plot by the government or the even Americans, or that it illustrated the incompetence of the Lee administration; there was no post-9/11-style national outburst against NK. And a similar shrug greeted the 2010 Yeonpyeong shelling; there was no nation-wide outburst for war or even counterstrikes comparable to how, say, Americans would have responded to such an attack.  In the parliamentary elections that just concluded, NK wasn’t an issue, even though the rocket launch preparation was making global news during the campaign.

I don’t think I would call this appeasement of Lind’s ‘madman.’ That would imply a level of interest, if only to duck or hide from the North, that isn’t there. Appeasement would also suggest that SK would eventually spend more on defense so that it would have more choices against the madman next time. But as Brendan noted, SK isn’t doing any of this. The military is shrinking, the defense budget is astonishingly, irresponsibly low, and there’s no effort to generate force totals with the requisite skills even close to what Lind says is needed to pacify a unified Korea. And that’s because a unified Korea isn’t really on the public radar.

To my mind, the real reason SK doesn’t respond is simple disinterest; they don’t want to make the sacrifices and run the risks.  K-pop, climbing the social ladder, learning English, moving ‘up to Seoul,’ reducing the Gini-coefficient, going to school in the US, playing golf, Yuna Kim, the scandals of the Lee administration, etc. are far more common topics of conversation with my students, family, and colleagues. I am the one who brings up NK, and the answers just aren’t that passionate.

More than anything else, South Koreans just want NK to go away. The most scary implication of this is that if NK can hang on a few more decades, the South won’t even want unity.

21 thoughts on “Why N Korea Gets Away with its Stunts: a Response to Jennifer Lind”