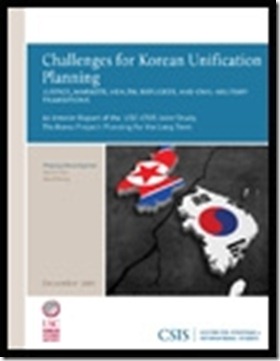 The University of Southern California Korean Studies Institute and the Center for Strategic and International Studies are running a joint Korea Project: Planning for the Long Term (pic to the left). CSIS will hold the last of three conferences in this project at the Asan Institute on January 21st next week. If you are in Seoul, you should go. The agenda looks pretty good. (Contact the Asan Institute.) I’d like to thank USC and CSIS for soliciting my participation..

The January 21 conference is actually the last meeting of the Project. The first meeting asked Korea area experts to look at unification; the second meeting asked functional experts to do the same. This upcoming third meeting will look at regional impacts from unification. I will comment on papers from Russia and Japan. I will put up my thoughts on those papers after the Phase III conference, but for now, I thought I would post my comments on the Phase II conference (by the functional experts).

Basically I argue that  Germany is a better model for what will happen here than either the occupations of Iraq or Afghanistan, or LDCs in transition. Also I don’t buy for one second that NK will enter into a meaningful ‘one country, two systems’ arrangement like in greater China. DPRK change meaningful enough to permit a federation would be so far-reaching, that it would inevitably raise the question why the DPRK  exists at all. Ideological change is an existential threat to the regime: why be a poorer version of SK if you’re in a federation with SK? why not just join up? This is the logic that undid the GDR. So it’s either implosion or stalemate IMO.

Here is the final CSIS report on Phase II (a must-read if you want to research unification); my gloss on that follows the jump. (Here is the much shorter Phase I report.)

b. (Too) Much of the commentary is obviously driven by the US experience in Iraq. This likely reflects the Washington experience/biases of many of the participants. In my opinion, Germany is a far better model, as I tried to argue in the Korean Journal of Defense Analysis (23/4, 2011). Germany is much more analogous: reunification, peacetime reconstruction, cold war-inspired division into democratic capitalist and Soviet communist halves, a singular, undisputed national-cultural identity, massive transfers from one to the other to pay for unity. Iraq, by contrast, was an occupation by a foreign power after an aggressive invasion, with reconstruction under fire by highly identifiable and disliked foreign elements, and deep ethno-sectarian splits that divided, not unified, the country.

c. The clearest lessons learned are mostly negative: do not do this or that. Again these are pretty clearly drawn from the US experience in war on terror occupations: do not disband the army too rapidly, do not de-baathify (de-juche-ify?) too widely or rapidly, do not remove local officials peremptorily, do not abolish the currency and local markets, etc. This is all probably accurate but would benefit from far greater comparison to cases of unification rather than occupation. Specifically, Germany, Yemen, and Vietnam are probably better.

d. The one big positive lesson is to sequence reconstruction: moving from immediate ‘basic needs’ economics first, all the way up to full-blown political transformation at the end. That is almost certainly good advice in NK, because the NK is practically a failed state outside Pyongyang. The FRG could takeover the GDR wholesale, because at least parts of the GDR state worked reasonably well. But in NK, the already-fragile systems that provide basic necessities will almost certainly collapse along with the state, pressuring the ROK not to just change the system constitutionally at the top, but to provide a lot of basic humanitarian assistance for a least a year. Here Iraq in the early days is a good model. The ROKA will have to do a lot of what the US army failed to do in the first six months, like providing clean water and power.

e. China’s interest in propping up NK is entirely cynical. Invoking the UN or norms of sovereignty to block unification is likely and should be perceived as a legalistic fig-leaf to prevent the emergence of a larger, wealthier, nationalist, democratic, US-allied Korea on its border. Relentlessly pointing out that callow calculus, at the expense of NK human rights and standard of living, should help discredit Chinese interventions.

f. Unification scenarios would help the Project in my opinion. A ‘one country, two systems’ model (as in greater China) is scarcely unification at all and does not require as much planning and research, because a Northern administration will be partly intact. I was surprised there was so much discussion working from the assumption that something like the DPRK hangs on. Far more uncertain is what full-blown unification would look like, and this scenario, which I take to be the heart of the Korea Project, desperately needs very detailed research. (The State Department’s Future of Iraq Project could be a model.) I am regularly surprised, here in Korea, how little Koreans appear to think/worry about the North’s collapse. When I ask my students and colleagues, I get shrugs and generalities. I find that I have generally thought more about this issue than most of the Koreans I know.

Here again the German model is very useful against the idea that unification will be phased or transitional. Once the ball of German nationalism got rolling, as tearful images of the Wall coming down spread around the world, it became all-but-politically and morally impossible to stop unification. The grassroots momentum, and the enormous normative authority it carried because of obvious GDR misrule, became a speeding train going downhill. Kohl could either ride the tiger or be pushed aside (as were those East German intellectuals calling for a ‘third way’). East Germany unraveled less than a year after the Wall opening; it simply collapsed into pieces in the FRG’s lap. Given how much worse NK is than the GDR, and how nationalistic Koreans are, I find this is a highly likely scenario. For example, splits in the regime could lead to flight by the Kim family – most likely to China – precipitating a major existential crisis of the state. In my opinion, SK should be planning on the full-scale ‘colonization’ (yes, that’s right, I said ‘colonization’) of NK after a major implosion that will be extremely chaotic, extremely fast, and hugely expensive.

9 thoughts on “USC/CSIS Conference on Korean Unification (1): it will cost WAY more than people think”