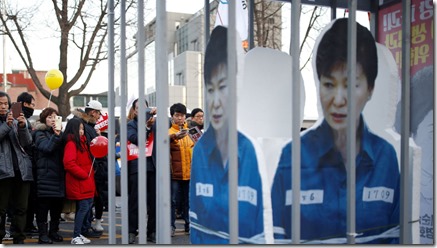 This is a local re-post of an essay I wrote for the Lowy Institute in the wake of the impeachment. My thoughts on the Moon election will come shortly. That is Park behind bars in the photo.

I agree with this analyst from the Washington Post who says South Korea just showed the world how to do democracy. That’s a great way to put it and quite correct. And this is all the more impressive as Western democracy embarrasses itself by veering towards illiberalism and norm-breaking.

Koreans always tell me how great Korea is because of hallyu or hansik, but that’s just fluff talking points. This is what really matters. Well done, South Korea. Now tackle the corruption problem for real so that this doesn’t keep happening.

South Korean president Park Geun-Hye was removed from office in March. She was originally impeached by the legislature, the National Assembly, in December. The country’s highest court, the Constitutional Court, is required to ratify such a motion for presidential removal. It did. Park is now regular citizen. Crucially, she lost her presidential immunity from criminal prosecution upon judicial completion of impeachment. She now face charges. South Korean opinion, but for a few holdouts who battled police briefly on the day of the court ruling, seems to broadly support prosecution. Park may well be imprisoned by the end of the year.

The scandal which felled Park has been covered extensively elsewhere. Rather here are a three larger political science lessons:

Corruption is now the single most important issue in South Korean domestic politics.

I have argued before for the Lowy Institute that North Korea is the most important issue in South Korean foreign policy, but at home it is now undoubtedly the graft that so scars the upper reaches of Korean politics and business. Outside analysts, most importantly the International Monetary Fund, have argued for years that South Korea needed to be cleaner. Transparency International ranks South Korea at a 52 out of 176 countries scored, a surprisingly high, and obviously disappointing, score for the world’s thirteenth largest economy. In previous years this reached into the 40s, but the sheer scare of ‘Choi-gate’ – named after Park’s grossly corrupt confidante who ignited the scandal – likely worsened the most recent number.

The 1997 crisis that nearly felled the Korean economy was caused by the ‘moral hazard’ of Korean businesses over-borrowing on the (correct) expectation that their buddies in politics would bail them out. Numerous regulatory problems, most prominently the poor safety enforcement which lead to the heart-rending Sewol ferry sinking, are blamed on regulators too cozy with business. So severe has public intolerance of graft become that the government rolled out an extremely strict anti-corruption law – ironically just as Choi-gate was breaking. And now of course, corruption reached so high it brought down the president herself.

To their credit, South Koreans seem increasingly less tolerant of this. One former president after another has been investigated. Conglomerate elites are frequently investigated, and the head of no less than sacred cow Samsung has been swept up in Choi-gate. Remediation is better than nothing, but prevention is the real way to pull down that TI score, and some Korean president soon will have to tackle this root-and-branch.

South Korea needs a vice-president rather than a constitutionally weak, fall-guy prime minister.

One obvious constitutional reason for the uncertainty Choi-gate generated is the curious South Korean prime ministerial position. South Korea is basically a presidential democracy, patterned off the long-standing US ally. That is, it has two separate election cycles, one for the executive, another for the legislature. Yet South Korea also includes an element from parliamentary systems – a prime minister – suggesting that South Korea is actually a ‘semi-presidential system.’ This PM, however, does not have the powers that normal semi-presidential PMs have. S/he requires the president’s approval to stay in office and does not lead a parliamentary majority independent of the president, even though there are separate legislative and presidential elections.

This suggest that this person actually functions like the US vice-president. But even here, the position fails, because the PM only becomes the acting president if the sitting president is removed or dies in office. The constitution requires that a new election be held within 60 days (which will happen under this current acting president on May 9). In practice then, the Korean PM has evolved into a fall-guy role – someone on whom the president can blame screw-ups and fire to sate public demands for accountability. Korean presidents routinely burn through several PMs during their tenure for these political reasons. An obvious solution to this weird, not-really-PM, not-really-vice-president position would be elevate the role to a full-blooded vice president on the US model. This VP could then have stepped into Park’s role and finished her term without the uncertainty of yet another election and the re-setting of the entire constitutional clock. Korean elections have hitherto been held in November. If the next president is to serve the same five-year term as all previous presidents, future presidential elections must now take place in May.

Full-blown, completed impeachments are rare in democracies. This is almost certainly proper. Impeachment overturns the popular will of an election to the land’s highest office and should be done only in extreme circumstances. Impeachments are purposefully hard to complete; the barriers are intentionally high and constitutional machinery frequently complicated. Often impeachment is threatened or pursued for political purposes and they fail, such as the uncompleted impeachments of US President Bill Clinton or previous South Korean president, Roh Moo-Hyun.

This rarity, although important for democratic stability, also means that there are few exemplars of a completed, legally proper impeachment. Even in the best-known impeachment model to date, that of US President Richard Nixon, the process did not finish. Nixon resigned first.

South Korea has therefore given us in the democracies something very valuable – a model of how to complete a forced presidential removal by rule of law. It is notable that the demonstrations for months against President Park never turned violent. No one died; there was almost no property damage; the protestors even picked up their trash. At the protests’ peak, an astonishing four percent of the national population was on the streets, yet nothing happened. The police presence never had to be supplemented by the military. Anarchists, militants, and other miscreants were not able to latch onto the marches to create political mischief. At no point did this evolve into a ‘color revolution’ or Arab Spring, targeting the state itself.

And the state behaved with commendable legality. The National Assembly followed the constitutional procedure, as did the Constitutional Court. In both bodies, the votes were overwhelming, 256-34 and 8-0, providing overwhelming legitimacy to the impeachment. When the Court read the final verdict, it spoke for nearly an hour, explaining its decision as the whole nation watched. This was an astonishing national civics lesson at the highest level, an education in constitutionalism and rule of law for an entire nation. This sort of moment almost never takes place in modern democracies and illustrated in brilliant detail the vast moral superiority of South Korea over the North. The acting president then gave a similar speech defining South Korea a liberal democratic constitutional state bound by rule of law, and that afternoon, the party which supported Park admitted its mistake after the Court’s final verdict, accepting the judgment and committing itself to work for rule of law and democracy. The only thing really missing was a statement from Park herself. She has yet to fully and publicly admit the legitimacy of her removal, continuing to insist she did nothing wrong.

In short, almost all actors behaved with commendable constitutional responsibility. At time when the president of the world’s oldest democracy lies continuously and populist nastiness is sweeping the West, this was a sobering display of political seriousness and maturity. All democracies have scandals. The question is how they deal with them. South Koreans just gave the world a model performance. In the nine years I have lived in South Korea, I have never been prouder to be here. This was their finest hour.

14 thoughts on “South Korea’s Finest Hour: Lessons from the Impeachment of Park Geun-Hye”