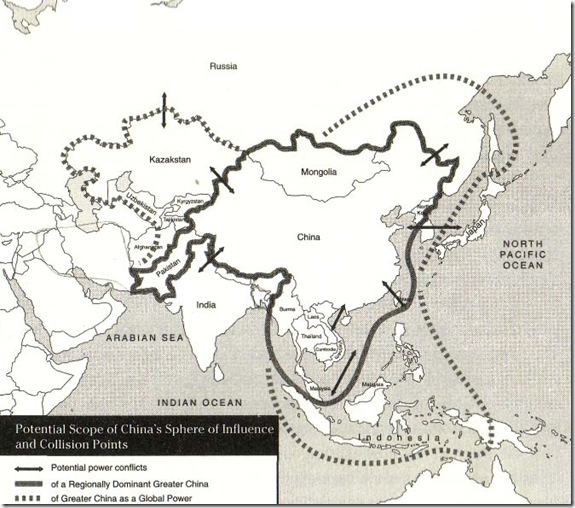 Part one of this post is here. I found this very provocative map here. For the official claim that China’s rise to global power is to be peaceful, read this. For the best academic argument for China’s peaceful rise, try this.

Hawks and realists tend to see China through the lense of history. Lots of other powers have risen in the past to challenge established powers, and usually conflict ensued. Everyone says that peace is preferred and war unnecessary, but in the end, jealous, bitterness, and the ideological pleasures of domination take hold. Minor conflicts grow and worsen; at some point, a hot war or protracted cold war begins. You could throw this model onto Germany (twice), the Punic-Roman competition, Japan’s 19th century rise at China’s expense, the USSR’s rise in the 40s and 50s, etc.

By contrast liberals and especially constructivists  look more at China specifically. Instead of seeing her as just one more hegemon with the same characteristics as others, China’s unique features because a causal possibility for peace. Here is a quick-and-dirty summary:

1. China is getting rich in the current world economic order (epitomized by its membership in the WTO), so why would she rock the boat? Right now she is gaining wealth and prestige, while dumping public goods/security provision on the US military (especially in Afghanistan, which war helps her more than us). Given this great benefit, a peaceful rise makes sense.

2. China has a history in the Sinocentric world order of treating the smaller peoples around it with some generosity. (I actually disagree with this empirically, but so be it.) The idea here is that the Chinese tributary system, especially of the Ming and Ching, only relied on violence when absolutely necessary. Much of Chinese pre-modern hegemony was based in ritual and moral suasion. So future Chinese hegemony in Asia will look back to this model rather than the Nazi or Roman ones in Europe.

3. Globalization has made a collision less feasible and valuable to the riser. This is a Thomas Friedman argument, rather similar to the one made before WWI by Norman Angell. The idea here is that globalization makes war less useful as a tool to pursue national interest and may in fact be remaking the idea of national interest altogether. In this new flat world, war is an anachronism of the nation-state era. The costs of war in the interconnected era are higher, because wars break all these international trade and financial connections that have made China so rich. Also, the benefits of war have declined, because in net-world, holding territory is not really a valuable economic commodity anymore.

4. Globalization and modernization are changing China into a status quo power, possibly prepared to accept US leadership. This is the cultural variant of the argument above. Here the idea is that as China joins the world to get rich, she will also learn from the world to be nicer. This was basically the gamble of the Clinton administration – economic modernization would entrain political liberalization – when it agreed to PMFN 15 years ago.

5. The Chinese elite have seen what happens to other, aggressive risers, and they have learned. This is a Ned Lebow learning argument, and the one I find most persuasive (probably because Ned was on my comps committee in grad school). The idea here is that the rise and fall of powers need not be some mechanical process, as if these states are robots. Instead, later hegemons and risers can learn from earlier ones. Ideally, they learn to avoid the mistakes of the past risers who collided and provoked wars.

7. The Chinese are nice. This is the most cultural and sino-specific of all the arguments I have heard. It is the one I heard the most last weekend in Beijing. Basically it says ‘we Chinese are different. We are nice and not belligerent. If you see us as a threat, that is your problem, in your head. Instead of telling us we will be mean and nasty someday soon, why don’t you come to China now and see how nice we are.’ As ridiculous as it sounds, I find this one somewhat persuasive. I have generally tilted against the peaceful rise school, but my time in China really gave me pause…