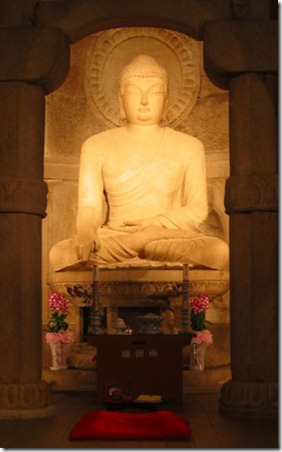 Now THAT is Korean art – the Seokguram Buddha; I’ve been to see it 3 times

The Internet has slapped down my arrogance. I told myself I wouldn’t write about k-pop, but that post on ‘Kangnam Style’ drove so much traffic, even the Daily Beast, to my site and twitter, that here is a response to all the comments. It’s kinda of depressing how my posts on Asian political economy or what-not get little traffic and a lot of yawns, but K-pop brings huge numbers. It’s like those Facebook posts on something you find interesting that no one bothers to look at, but put up a pic of yourself blotto on a beach, and everyone ‘likes’ it.

1. I am not sure K-pop is really ‘family-friendly,’ as one of my commenters argued. I hadn’t really thought about that, but I guess it’s nice to have light, fluffy lyrics instead of gangster rap or Robert Plant screaming that he’s ‘your backdoor man.’ But if you watch the performances and look at the appearance of these ‘bands,’ it is highly sexualized and teasing – and that is obviously far more important the music itself, which just comes from a music machine. These band members can’t play instruments, but they do look like sex symbols and swing around on poles wearing leather boots like strippers. (*sigh* you see why I wanted to avoid writing about k-pop?) Is that what you want the kids watching? What kind of signal does that send?

Further k-pop is most definitely ‘encoded’ with race and gender archetypes, which is just a fancy way of saying it encourages young Asian women to be as white, sexy, and thin yet large-breasted as possible. That these singers frequently have had plastic surgery, breast-enhancement, and skin-whitening treatment (essentially a skin ‘dye-job’ – yes, really) to achieve this look – and that Korean teenagers get plastic surgery in growing numbers – is even more frightening. IMO, feminists and liberals generally should be up in arms about the extreme lookism, and racial and body discomfort this breeds in young Asian women. This is a very important reason to loathe k-pop.

I see this all the time; my female undergrads come to school in 2-3 inch heels, heavy cosmetics, and mini-skirts. I hear at social events or even office hours about plastic surgery decisions. And I teach a state school. At the privates, where the wealth level is higher, it’s a fashion show, and most of this burden falls on women. That the corporations who run these bands are dominated by older men, who are regularly accused of demanding sexual favors in return for exposure and air-time, should surprise no one. For the full story on the reactionary, exploitative sexism of k-pop, go here.

2. Of course, there is lots of good Korean (and Asian) art (duh), but all that flashy J-pop and K-pop sucks the oxygen out of the room. As I tried to argue in the original post, there is good Korean rock, garage bands who really try in the nightclubs. There are lots of Korean musicians who would agree with my argument that k-pop is ridiculous and that Korea needs Kurt Cobains and Jim Morrisons. I have seen them perform. But again, the mega-corporate control of music in Korea means these bands never get the exposure they need. It’s nearly impossible here for outsider musicians to climb the ranks through indie distributors (b/c they scarcely exist), sorta like Elvis’ early career. Once again, the corporate concentration of Korea’s economy stifles originality.

Also, Korean traditional or folk music is often very exhilarating and rich. It’s totally different from the classical music we grew up with. The melodies are frequently fast and exciting. The use of percussion adds lots of flare. The dancing that accompanies it is unique, exhausting, and fairly mind-blowing the first time you see it. The speed and rhythm were apparently to take the minds of peasants off their hunger during poor harvest seasons. My wife and I listen to this at home, but foreigners almost never get exposed to it, and ‘Kangnam Style’s success means that that is even less likely.

3. I got some flak that I over-read the whole thing. Ok. Perhaps. But that’s part of what we do in social science

, and here it’s only because the Korean media and government relentlessly manipulated this song, as I tried to document with the many links in the last post. Unfortunately, just about every Korean success story ends up instrumentalized for an in-your-face, inferiority-complex-driven Korean nationalism that Korea really needs to outgrow as G-20/OECD state. Apparently the government even flirted with a ‘Dokdo Style’ spin-off, as a way to capitalize on ‘Kangnam Style’s success to push Korea’s territorial claim against the Japanese. Come on. Really? Do we have to politicize EVERYTHING? Can’t it just be a fun little tune we like, as Psy apparently intended it to be? But I guess not, so I don’t think that my commentary tying this whole thing to Korean politics was unwarranted.

4. If my comments ‘cut deep,’ it’s only because I live here now and feel somewhat vested in these issues. Yes, Korea is mostly a nice place to live. It’s wonderfully safe. The food is healthy and tasty. The deep communitarianism that undergirds widespread acceptance things like universal health care is amazing and a lesson to the American right. There is far less open poverty than in America; there is nothing like the callous neglect of inner cities that so stains the US. The welfare state and ‘redistribution,’ in moderation, are accepted as necessary for political comity and enjoy consensual support. There’s nothing like the religious fundamentalism that so blights America and the Middle East (not that American-inspired Korean evangelicals aren’t trying unfortunately). Science and learning are welcome, not some liberal conspiracy theory. And for all the cliché, SK is a ‘frontline of freedom,’ facing off against the worst country on earth that has sought for decades to undermine this liberal democracy and routinely attacks it. I admire that fortitude tremendously.

Oh, and you can watch professional video gaming on TV.

They’re so good, they make me want to throw my Xbox out the window.

But none of that means that Korea shouldn’t be more egalitarian, less hierarchical, less economically oligarchic, and less nationalistic. So the good and the bad come together.

Ok, I can’t write any more banalities like that last sentence. Enough. No more pop-culture. So here is my latest op-ed on foreign asset-ownership in Korea. Wait, stop yawning!