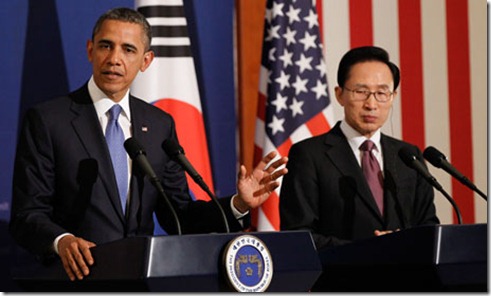 The Diplomat asked me for a short piece on what South Korea would like from the new US president, as part of a general forum – including Shen Dingli from Fudan on China and Adam Lockyer from Sydney on Australia – on Asia and the US election. I have reprinted my essay below, and here is the whole forum. It’s worth a read, and Lockyer’s disbelief at tea party rhetoric should once again be a wake-up call that American global leadership is not an entitlement of our ‘exceptionalism,’ but something we must earn through seriousness and responsibility. I’d like to thank Zachary Keck for soliciting my participation:

1. At the elite level, the ROKG (Republic of Korea government) probably wants a standard reaffirmation of the US- Korea alliance from whomever wins.

My sense from the media and my students and colleagues is that South Koreans are not really paying much attention to the US presidential race. (Neocons take note of such treachery!) Neither Romney nor Obama have much to say except for typical boilerplate on SK – defending freedom, resisting tyranny, close friend of America, yawn. In fact, I am not sure SK’s even been mentioned. And no one likes NK, so that is an easy issue to posture on too. (In fact, I am surprised Romney didn’t take the opportunity in the chest-thumping third presidential debate to accuse Obama of appeasing NK.)

None of the debates mentioned Korea, which is arguably a re-assurance to the South. The current president, Lee Myung Bak (pic above), put the alliance on a good footing a few years ago after the tension of the leftist presidents before him, so no news is likely good news. That is, if the Americans aren’t talking about Korea, then nothing’s going on and there’s no need to really pay attention. Contrary to the Japanese and Chinese, Koreans haven’t really been following the whole ‘pivot’ discussion either. The ROKG is pretty happy with the current hub-and-spoke bilateral set-up with the Americans, so the pivot isn’t really exciting. (I gave a presentation on this last week, and everybody yawned, thought it was more American posturing.) Besides, it’s far more important to yell at the Japanese over the Liancourt Rocks. And in turn, whoever wins in the US will likely reaffirm the alliance, and that will be that. At the strategic level, not much is going on.

2. Again at the elite level, the ROKG would like US forces, especially their technology, to hang around more.

Korea spends only 2.7% of GDP on defense, which is woefully inadequate IMO, given that it is an encircled middle power bordering the most dangerous country on the planet. (I’ve made this budget argument many times on this site. Start here.) The Korean military is still mostly a land and infantry force. It relies a lot on the US for air, naval, and C4ISR assets. (Here is a recent piece on the Revolution in Military Affairs in Korea. It’s sorta happening, but slowly.)

So broadly speaking Korea still needs the US to capture the benefits of the ‘networked battlefield.’ SK has lots of soldiers (around 650k), and it could fight a grinding, manpower-intensive, defense-in-depth conflict with NK modeled on WWII or the first Korean War. But more asymmetric, nonconventional actions – like last year’s Libya operation with its intensive coordination of airstrikes, drones, and logistical, satellite, and intelligence demands – is beyond the SK military. So for lighter contingencies than an all-out North-South slug-match, SK still needs American tech and logistics. This will become particularly crucial if NK implodes and the South has to march up there. In that sort of chaotic environment, the intelligence and direction that US networks (satellites especially) can bring will be critical to hunt down MWDs, find rogue generals and Kim family members before they escape, and most importantly, disarm the North Korean People’s Army as fast as possible and prevent an insurgency in what will effectively be an occupation in the first year or so.

My own sense is that SK should actually do a lot more of this stuff itself. I think fixing NK is going to be hugely more expensive and difficult, and I am frequently unnerved by how blithe S Koreans seem to be on this. ‘Full spectrum dominance’ is asking too much, but a thicker, fuller SK capability to win the war – conventional or asymmetric – and properly occupy NK (i.e., not like America’s occupation of Iraq) is a national asset worth having and paying for. I’ve actually made this argument a few times at conferences, but (unsurprisingly) no one seems to like the implication that SK would have to double its defense spending.

It’s also well known that for as much as the US complains about allies free-riding, we don’t actually want them to have too much independent national power (we like hegemony), so we incentivize free-riding even as we complain about it. Also, I feel morally awkward recommending a huge defense build-up for a state that was a military dictatorship just 25 years ago.

In the end, all this means that S Koreans, especially the elite who couldn’t get a major defense increase out of the National Assembly even if they wanted to, would like to keep US forces here in some strength indefinitely. Whoever wins the US presidency will get pushed not to go any lower than the current 28.5k US soldiers here now.

3. At the popular level, though not really well articulated, is the desire to hold onto the Americans to help fix NK when it finally goes.

I am speculating a bit here – more than on points 1 and 2 which are broadly accepted. I am regularly surprised and unnerved by how unprepared SK seems to be for unification. I don’t mean formal plans from the ministries. These exist, and I’ve seen lots of powerpoints of them and what is supposed to happen. (Although it is staple joke of SK political humor that the worst/dumbest guy in the cabinet gets made unification minister, because he doesn’t have to do anything.)

Instead, I mean the average Joe Korean (Kim Korean? whatever). I get almost no sense from students, family, friends, colleagues, and others that South Koreans are ready for the huge project this will be. Instead there seems to be this vague sense that somehow the UN or the World Bank or the Americans are going to do a lot of it, or that maybe the Japanese will pay for it, or that NK can be roped-off indefinitely as some kind of massive export processing zone for the chaebol (more likely it would degenerate into something like the Gaza Strip), or something, whatever. What I don’t see at all is a realization that this will be occupation and reconstruction on par, or worse, than Iraq or Afghanistan in the last decade. In fact, I frequently teach those cases and their problems in class for just this reason – to get the ball rolling on discussions of reconstruction, occupation, ‘development-under-fire,’ etc. I never see these topics at conferences here, but it’s going to land on South Koreans like a ton of bricks when NK finally implodes. In fact, I argued elsewhere that this project may be so expensive, so socially disruptive in the South, and so unwanted, that it might overwhelm Southern society and institutional capacity.

To the extent that this catastrophe-in-waiting is floating around in the median voter’s head, I imagine the hope/desire is for the Americans to hang around in Korea through unification so that a certain amount of that NK reconstruction burden can be buck-passed to them. I don’t think Americans are really conscious of this or will do it, but I think Korean public opinion has not really been educated to that awareness

4. At the popular and elite level remains the strong desire for the US to keep on importing.

Korea is still a classic developmental state – industrial policy is common (you’ve never seen so many 5-year plans outside of communist states); ‘strategy’ ministries and agencies are ubiquitous; the media obsessively reports the trade surplus each month, and if Korea ran a deficit, there’d likely be a political crisis; the won’s appreciation is regularly sterilized. (I’ve written about a lot of this before.) Korea is most definitely contributing to global imbalances, and it takes a lot of effort to try to get students and others to see the benefits of floating currencies which prevent massive imbalances. Even at conferences with Korean economists, I hear undervaluation and other mercantilist gimmicks defended. The obsession with a current account surplus is almost theological.

This means the US has to continue to be Korea’s ‘importer of last resort,’ as Obama once said. Korea is not ready, at either the public or elite level, to move away from export promotion and the identification of national champion mega-exporters like Samsung with the national interest. Liberalization is coming slowly; President Lee pushed through two big free trade deals with the US and EU. But the export instinct runs deep, and the Americans are the big market Koreans obsess about. (Particularly when it comes to cultural exports, btw. It is a national obsession that K-pop break out in the US.)

I don’t think this interest is consciously articulated either. But I have little doubt that most Koreans desperately want the US to go on absorbing Korean exports at past rates and don’t know or care much about the deleveraging most American households are trying to pull off.