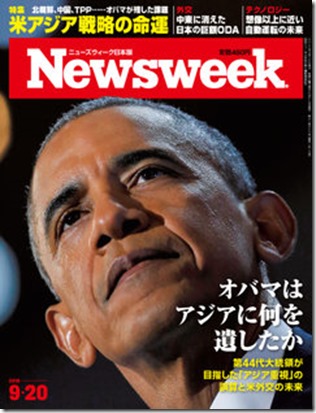 The following is a re-up of an essay I published this week with Newsweek Japan. I was thinking about Obama’s attendance at both the G-20 and ASEAN this month. Those trips really do reflect his commitment to the pivot to Asia – probably as much out of conviction as out of a desire to escape the sink-hole of the Middle East.

But as readers of this website know, I am rather skeptical that the pivot actually grips the median American voter. Sure, elites love it, especially realists. It has all the trappings of geopolitical excitement think-tankers and IR types love. But regular Americans care way more about other regions first – when they even consider foreign policy, which the rarely do when they vote. Europe and increasingly Latin America will always have a powerful ethnic pull, because most Americans have roots there, while the Middle East bewitches the American evangelicals who are obsessed with Islam and Israel. China, even though it is vastly more important, isn’t actually as pressing to voters except as a trade issue.

This is not to say that I don’t support the pivot. I do. Very much. But if you look at Trump and Clinton’s foreign policy utterances, they basically cleave to the pre-pivot norm: the obsession with the Middle East, Islam, terrorism, while Asia is basically a trade-cheater. Hillary has turned against her own creation, TPP, while Trump sounds like he’d spark a trade-war with China, and maybe even Japan.

So if you’re an Asia hand, enjoy your moment in Obama’s sun. Next year, we’ll back to warring in the Middle East.

US President Barack Obama just concluded his last visit to the Asian region as president. He attended both the G-20 summit in China and the Association of Southeast Asian Nations summit in Laos. His presence once again underscored his commitment to the ‘pivot’ or ‘rebalance’ of American foreign policy toward Asia. Given his successors’ – Hillary Clinton or Donald Trump – greater skepticism toward Asia, this is Obama’s last chance to enroot the pivot in US foreign policy.

First announced five years ago, the pivot recognizes Asia’s growing weight in global politics and economics. It seeks to reduce America’s deep footprint in the Middle East and re-direct these resources and assets to this region. The argument practically makes itself. China and Japan are the world’s second and third largest economies. China, India, and Indonesia are the world’s first, second, and fourth largest countries by population. The region’s economies are the most dynamic in the world; trade volumes are immense, and GDPs are growing fast. Obviously a conflict in this region – mostly likely between China and Japan – would have enormous consequences.

US involvement in the Middle East pales by comparison, where populations, GDPs, and militaries are much smaller. Israel, for example, has less than 10 million people, and Iran around 60 million. Terrorism captures headlines, but more Americans die of lightning strikes (yes, really) every year than terrorist incidents. The Middle East plays a far greater role in US foreign policy than its objective weight would suggest, and Obama realizes this more than most in Washington. Indeed, a cynic might say Obama is promoting the pivot as an excuse to extract the US from its unwinnable wars and quagmires in the Middle East.

Chinese critics contend the pivot is just military containment of China, a characterization Obama has contested. He argues that the US is also Pacific power with a right to be locally engaged. On this trip, for example, he is the first American president to ever visit Laos, a country the United States devastated during an illegal bombing expansion of the Vietnam War. It is a mark of Obama’s continuing desire to improve America’s regional relationships – particularly in contrast to George Bush’s earlier abrasive style – that he wanted to make such a trip at all and promised to help clean-up unexploded munitions left over from the war.

The pivot makes for good geopolitics. To globalized American elites, it is plain that Asia, particularly East Asia, matters more to American prosperity and security in the long-run than the small, failing states of the Middle East, or mid-size, often corrupt, states of Latin America. But the pivot’s persistent weak spot is its shallow roots in American public opinion, a point made clear in the many US presidential debates of 2012 and 2016. Again and again in these debates, most recently in September 7, 2016’s ‘Commander-in-Chief’ forum, Asia is scarcely mentioned. Average Americans just do not care that much about the region. Instead, it is the Middle East – with the focus on Islam, terrorism, and Israel – and Latin America – with the focus on immigration – that dominate.

US public opinion on alliance commitments reflects this too. Polling by the Chicago Council on Global Affairs routinely finds less than 50% of Americans want to fight wars on behalf of US allies in Asia. For Japan the number is around 35%, for Taiwan under 25%, and for South Korea around 45%. Or this factoid: more Americans learn Latin than Chinese, Japanese, or Korean. For this reason, I have often argued in this space that Japan needs to take the China challenge more seriously on its own, start spending more on defense, and start improving regional relationships, most obviously with South Korea, then India, Australia, and Vietnam. Last month, I argued in this space that the US is unlikely to fight China just over allies’ trade routes in the South China Sea. I still believe that is so.

Obama is surely aware of these issues. He knows the emotive power of images of terrorism, and he knows that American evangelical Christians are particularly focused on Israel and Islam. For many conservative voters, Asia is a far away trade platform for cheap goods at Walmart, while Islamic radicalism is an existential threat. For liberal voters, Asia is mercantilist trade cheater decimating US industries and unions.

Obama’s successors have responded to these images. Both Clinton and Trump have suggested far tougher trade practices with Asia, including a rejection of the Trans-Pacific Partnership, while also promising a more interventionist foreign policy in the Middle East (particularly regarding ISIS). Hence Obama’s many trips to Asia. He is trying to deepen the pivot in US foreign policy, before his successors fall back to traditional form. In five years, we may think of Obama’s late presidency as the high point of the pivot.

8 thoughts on “Is Obama’s Second Term the Highlight of the Pivot to Asia?”