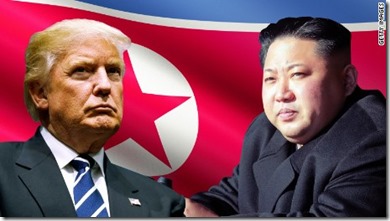 Sorry for the long hiatus. The holidays were pretty busy and exhausting.

This is a local re-post of something I wrote The National Interest late last year. I like these end-of-the-year retrospectives and predictions. So here is a look back at all the craziness around North Korea in 2017.

The most obvious new element is an American president talking to the world’s most dangerous state like a petulant man-child. Honestly, Trump just made everything worse, and his rhetoric almost certainly convinced the Kimist elite that going for nukes was wise.

The other big thing I think is how the debate over responding to North Korea is increasingly cutting out the doves. North Korea with nuclear weapons is such a scary prospect that it is side-lining engagers and powering the hawks in the debate. Increasingly the debate is an intra-mural one among the hawks, between moderates (where I’d put myself), who are wary of strikes and at least open to talks even though we know the Norks will gimmick them, and ultras like Trump or Nikki Haley who genuinely seem to want to strike. The real question in the US debate now is whether the moderate hawks, with an assist from the doves, can restrain the ultras from attacking North Korea this year.

The full essay follows the jump…

This was an extraordinary year for North Korea. It finally achieved a regime dream going back decades: establishing direct nuclear deterrence with the United States. Despite months of tough rhetoric and war threats from US President Donald Trump, the North pushed on and became the first rogue state to acquire a functional nuclear intercontinental ballistic missile.

Negotiating with North Korea will become that much harder from now on. The resources devoted to these weapons are rumored to represent perhaps as much as 5% of GDP. For a state as small and poor as North Korea, they are an enormous sacrifice. Hence, Northern leader Kim Jong Un will almost certainly not trade them away, or the concessions he will demand will be tremendous. But some kind of negotiations with the North are almost inevitable now. North Korea with nuclear weapon and no outside supervision at all – no participation in the Non-Proliferation Treaty (NPT0 or International Atomic Energy Agency (IAEA) – is so frightening, that pressure for the US to talk to Pyongyang will grow dramatically. Secretary of State Rex Tillerson’s recent free-lancing on negotiations suggests this.

1. Pyongyang is hell-bent on acquiring these weapons.

Probably the most important lesson we learned this year is that North Korea is going to have these weapons no matter what the rest of the world says or does and is prepared to carry heavy costs for them. Since the collapse of the Six Party Talks, North Korea has been increasingly sanctioned and isolated. Previous South Korean President Park Geun Hye (now-impeached) sought to worsen that isolation by trimming away at the North’s diplomatic relationships, especially in the global South. China too has slowly stepped up sanctions and broadly concurs with the Americans on a denuclearized North. Despite all this, the North persisted. In the face of global rejection, it nonetheless tests bombs and missiles relentlessly under the leadership of this newest Kim (Jong Un).

That the North clawed its way into these weapons despite decades of hassle, global isolation, and sprawling multilateral efforts to prevent them should serve as a warning. Any rogue state with sufficient resources and ruthlessness can now likely acquire these weapons. If the North can do it against all odds, then many other troublesome states might well be considering this too.

2. Bluster will not stop them.

Trump’s harsh language on North Korea was arguably an experiment. No US president had ever talked to the North this way; perhaps it would intimidate the North Koreans? Trump talked as the North does. Pyongyang has threatened for years, for example, to turn Seoul into a ‘sea of fire.’ Trump turned such incendiary rhetoric back on the North, threatening to send an ‘armada,’ to ‘totally destroy North Korea,’ and use ‘fire and fury’ to do so.

Unsurprisingly though, the schoolyard taunting did not work. The North, predictably, refused to bend, rather matching Trump insult for insult. In the end, even Trump seemed to realize that his large threats were leading nowhere, given how risky the strike options are. After the most recent missile test on November 29, Trump restrained himself, saying only, ‘we’ll take care of it.’

3. Safety is a looming issue.

As North Korea nuclearizes outside the NPT-IAEA framework, questions about safety are growing. We have little technical information about the state of Northern reactors, their safety protocols, waste disposal practices, maintenance, and so on. A tunnel at North Korea’s primary testing facility collapsed this fall, and the North Koreans said nothing. A Japanese newspaper broke the story several months later, and South Korean scientists are now predicting that continued testing at Punggye-ri may actually bring down the mountain and release radioactivity in the manner of Chernobyl.

When talks do eventually resume, this will provide a curious form of leverage to the North. Its nuclear program is now well-established and growing; Kim has spoken of making North Korea ‘the world’s strongest nuclear power.’ Outsiders will be increasingly desperate to get into the North to inspect its facilities, at minimum to insure it is not proliferating or on the cusp of a meltdown. This problem will worsen significantly in coming years.

4. Hawks are dominating the debate over North Korea.

It is an irony that just as the North’s overt nuclearization is forcing talks back to prominence, hawks seem to be ascendant in the debate over responding to the North. Major western outlets like CNN, Fox, TNI, The Economist, The Atlantic, and the big American papers are dominated now by hawkish pundits on North Korea. Even the left in South Korea, which took the presidency earlier this year, has felt compelled by North Korea’s extreme intransigence, to sign up for Trump’s ‘maximum pressure’ approach. South Korean President Moon Jae-In, an earlier architect of outreach to North Korea and no hawk, has followed Trump’s lead on pressuring the North. China too inched further and further along the path of yet more pressure.

This shrinkage of the debate to a one between moderate and ultras among the hawks is cutting out dovish voices encouraging engagement. Now, the debate seems to be more about more sanctions and isolation (the moderates) or airstrikes (the ultras). North Korea’s adamant refusal to talk has encouraged this, and it raises the likelihood of eventually exasperation and a willingness to risk strikes.

These four 2017 trends are unlikely to change much next year. North Korea will not likely rein in its program, thereby increasing marginalizing doves in the debate over what to do. As the program grows apace, safety anxieties will worsen which may incidentally help push the US, South Korea, and Japan back toward talks. But if Trump did teach us anything this year, it is that the North Koreans will not get brow-beaten into giving up their program. It is here to stay.