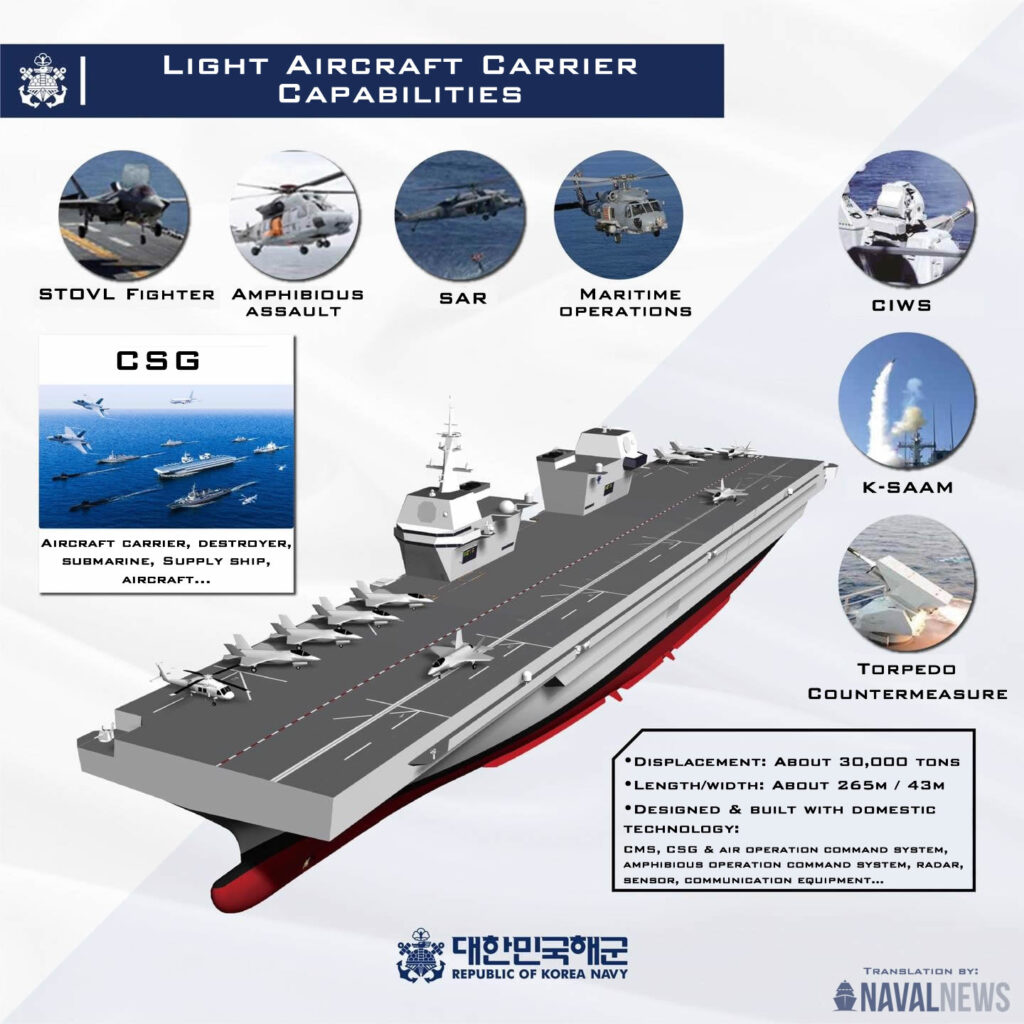 There has a been a pretty vibrant debate in South Korea over building an indigenous aircraft carrier. That debate has been especially resonant where I live – Busan – because it would probably be built here.

This post is a re-up of an op-ed I wrote for the Japan Times this week. I also wrote on this once before for a ROK navy-adjacent think-tank.

IMO, the best argument for a ROK carrier is China’s creeping, long-term effort to dominate the South China Sea. Oil from the Persian Gulf traverses the SCS on its way to East Asia’s democracies – Japan, South Korea, Taiwan. Chinese control of the SCS oil sea lane would allow the PLAN to embargo carbon imports for whatever bogus reason Beijing could think of.

We can be sure that Chinese bullying in the region will use this tool as soon as China consolidates control of the SCS and puts up enough bases to launch blockades. Indeed, I have long thought that this is the primary reason China wants to control the SCS so badly. It’s not clear that there are a lot of natural resources in the seabed there or that they can be cost-effectively extracted. And all the little islands and sandbars in the SCS aren’t valuable in themselves.

But this would require SK to start seriously thinking about 1) power projection southward, 2) contesting Chinese sea control inside the first island chain, and 3) cooperating with Japan which is also threatened by this and which has a larger navy. That would all be great but is a big ask for a country not used to thinking about foreign policy much beyond the peninsula. And that is my big concern: that the previous Moon administration really wanted to build this because Japan is building an aircraft carrier, and wants to park it next to Dokdo. That is the wrong reason to build one.

Here is the original, pre-edited version of my essay from the Japan Times:

South Korean has considered, in the last year, constructing a light aircraft carrier. This has provoked controversy. The decision to build it or not has swung back and forth. The South Korean navy very much wants it and has made a public push for it. The South Korean legislature, the National Assembly, ultimately decided to fund it last year. But the government of new President Yoon Seok Yeol is apparently re-considering.

Most countries in the world lean into either land or sea power, as dictated by their geography. Unsurprisingly, island states develop ‘blue water’ (i.e., ocean-going) navies. Japanese modernization, for example, lead to maritime power in the last century and half. Britain too had a large navy at its peak.

South Korea would appear to fit into this box. It is an island of sorts. It has just one land border, but that is tightly sealed. So strategically, South Korea is nearly an island.

But necessity has made South Korean a land power nonetheless. Its border with North Korea is the most militarized place on the planet. The North Korean army numbers over one million active-duty soldiers, with millions more in reserve. North Korea’s air and naval power are small in comparison. A second Korean war, like the first one, would mostly be fought on the ground. END_OF_DOCUMENT_TOKEN_TO_BE_REPLACED This is what a peaceful transition of power looks like, American Republicans! Moon and Yoon follow the rules. That’s good. Learn from that.

This is a repost of an article I wrote for The Japan Times.

My impression from teaching my student is that the new South Korean president, Yoon Seok-Yeol, ignites no enthusiasm. He reminds them of their grandfather – old, kinda out-of-touch, lacking charisma. But honestly, after 5 year of Moon Jae-In’s rollercoaster with Donald Trump and Kim Jong-Un, I’ll take some bland boredom.

Yoon jumped into the race last year and does not have deep roots on the right here. Most importantly, he does not (seem to) share SK right’s fatiguing obsession with vindicating impeached former conservative president Park Geun-Hye. Park was guilty already! Get over it. I am hopeful that means he won’t prosecute Moon in his post-presidency solely for revenge, which I think almost any other traditional right-wing POTROK would do.

On policy, Yoon will lean to the right. He’ll be conservative on social mores – no gay marriage, no anti-discrimination law (sigh) – but he won’t be Trump. On economic issues – chaebol power, overlong work hours – he’ll do nothing, unfortunately. But at least on NK, we won’t have to hear anymore about what a misunderstood great guy Kim Jong-Un is. Enough of that. Those calling him the Donald Trump of Korea are probably just casting around for a label. Yoon doesn’t behave like Trump at all, thankfully.

Here is my essay for The Japan Times:

Yoon Seok-Yeol was inaugurated president of South Korea this week. He is a former prosecutor who only entered politics in the last year. He is from the conservative People Power Party. But he has no roots in that party or its various factions. Nor does he seem particularly ideological. He channels the basic anti-communism – aimed at North Korea – of the South Korean right. That has long been the core motivator of South Korean conservativism. But beyond that, he seems like a bland centrist.

This is a surprising turn. There is no obvious reason why South Korean conservatives would want him as their candidate, beyond simply defeating the left in the election. Yoon has no particularly programmatic interest in domestic politics. He is not a libertarian or religious social conservative, for example.

He has been called the ‘Donald Trump of Korea,’ but that feels mostly like foreign journalists grasping for an ideological handle for him. If he is a Trumpian populist, he has not talked that way. Trump’s signature mix of bombast, racism, tariffs, and loud nationalism is not how Yoon campaigned. South Korea got a lot of (deserved) criticism for its erratic, corporate-profits-uber-alles approach to the Ukraine War. It has since come around, but only after the US twisted its arm with export control threats. And its MPs mostly skipped Zelensky’s speech to the SK parliament. All in all it was a pretty poor showing.

This is a re-post of a column I wrote a few days ago for the Japan Times. For other commentary in the same vein, try here, here, and here.

Some of this was straight-up mercantilism. The government complained about corporate investments in Russian being put at risk, plus the wider trade relationship. That came off so callous and tone-deaf that South Korean citizens pushed back. But it illustrates a long-established problem in South Korean foreign policy: the country’s largest corporations are far too influential, creating a what’s-good-for-Samsung-is-good-for-Korea mentality which is wrong, plutocratic, and undemocratic.

But the larger issue applies to all democracies trading a lot with autocracies: trade creates leverage, and autocracies are happy to weaponize it. China already did this in the THAAD fight with S Korea a few years back; New Zealand has gotten criticism as a weak link; American businesses like Disney and the NBA have been craven before China. All of us democracies are going to have to start unwinding our economies from nasty dictatorships to avoid betraying our values for corporate profits, and since China is South Korea’s biggest export market, the new Yoon government should start that now.

Here is that Japan Times essay:

The Ukraine war has a been a unique challenge to Asia’s democracies. The war is far away. It involves peoples cultural distinct from this region, and its impacts will be most directly felt in Eastern Europe. Russia’s complaints and motivations mostly concern the West, particularly the post-Cold War European settlement which much reduced Russian power there. Inevitably then, the West’s response has been the most active. It is in the firing line.

But there are Asian ramifications too, which Japan, to its credit, seems to have grasped. Despite long hesitation on the use of sanctions – despite the regular use of sanctions by its American ally – Tokyo appears to have decided that this Russian aggression needs to be punished. The Russian invasion is blatant imperialism. Were Russia to get away with absorbing a smaller neighbor as the world watched, it would send a powerful signal to China that it could do the same to Taiwan. That would be a direct security threat to Japan. And Russian tactics – the purposeful shelling of civilian areas, and the operation of death squads to murder civilians en masse – have been a moral shock. Japan’s decision to support the sanctioning of Russia looks increasingly like the right call.

By contrast, South Korea’s response has a been mixed bag. When the war started, Seoul’s response was hesitant and ambiguous, provoking a wave of international criticism which the government neither seemed to understand, nor know how to respond to. The first response of South Korean President Moon Jae-In’s administration was fear for South Korean exports to Russia. Lee Jae-Myung, the leftist candidate in the recent presidential election at the time, blamed Ukrainian president Volodymyr Zelensky for provoking the invasion, which brought another wave of social media backlash. For days, it was not clear if Seoul would support the sanctions regime. South Korea only came around when the US threatened a trade exemption its exporters need. This is a local re-post of a column I wrote for the Japan Times on the election.

Basically, the left should have won. Its combined vote total was 1.5% greater than the right’s. But that vote was split over two parties (47.83% and 2.33%), with a small left-alternative party pulling away enough votes for the right (48.56%) to win the election.

As I argue in this Twitter thread, this election is a textbook example of Duverger’s Law and strategic voting in action. Whenever I discuss this in class, students always complain about strategic voting. The voters hate it. Everyone wants to vote their heart (sincere voting). But in a plurality race, that is a great way to throw the election to the other side.

In fact, the irony of sincere voting is that your precisely your enthusiasm to pull policy further to the left (in this case) by voting for the left-alternative party actually pushes policy to the right. That is, South Korea’s most convinced leftists delivered the country a right-wing government.

There are alternatives, like proportional representation (like in Germany) or double balloting (like in France). But that usually requires constitutional changes, so it’s best to follow the math not ideology. Which sucks. But I don’t see an alternative.

Less reported in the international press is the fact that an alternative left-wing candidate, Sim Sang-jung, also ran. She received 2.33% of the vote, which almost certainly would have gone to Lee, of the ruling Democratic Party, had she not run. Sim “threw” the election to Yoon, as her votes would have given Lee a clear victory margin.

South Korean presidential elections reward the candidate with the most votes. This plurality requirement strongly encourages all voters on the right and left to converge around one unity candidate for each side. Small-party candidates can pull away votes from an ideologically similar, large-party candidate who might otherwise win.